skip to main | skip to sidebar

How To Bake A Monkfish... 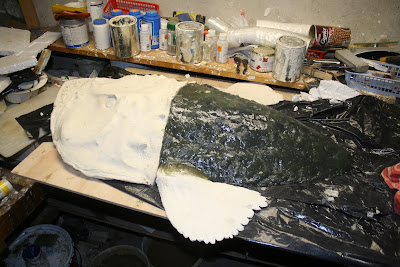 My friend Khalid, who likes to call me a fish falsificator, this is truly something for you! And for your benefit, I write this in English.

Tor from Lista Natural Museum brought me a monkfish. Well, it was actually only a monkfish head, since the rest of the 25+ kilo fish was too valuable to be wasted on me... those who have looked at my blog previously might have seen the head before.

Anyway, what Tor actually wants is a "whole" fish. That is, not exactly whole, but since it is to be displayed as if lying on the sea bottom in a natural environment, I need to create the impression that the rest of the fish actually exists, at least as far as the spectators can see. So I have to build a "fake" body for the head and the fins.

To me, this immediately brings to mind the Genie from Disney´s "Aladdin". (I know all the Disney animated movies by heart, having raised two girls who were obsessed with them...) The Genie, btw, is my absolute favourite carachter of them all. Baloo the bear might come close, but no one else by far...

Aladdin and the Genie have just escaped from the cave and are resting in an oasis. Aladding is pouring his heart out about the Princess and his hopeless love for her. Then, suddenly, the Great Idea springs to his mind - "Genie, can you make me become a prince?"

The Genie, having double-checked that this really is a legitimate wish, promptly produces his cookbook and starts flipping the pages. "Let´s see, hmm-no, -no, Chicken á la King -no, aahh, here it is: How To Bake A Prince!"

It would surely have been easier for me if I had been a Genie, but nevertheless, here I am Baking A Monkfish. In the first picture, the head and fins have been fitted into the styrofoam preliminary body form. Subsequently, the form has been covered with plastic bag (black plastic garbage bag, the polyester won´t stick to it), and thereafter fiberglass reinforced polyester plastic was spread over the whole shebang. The body is kind of stumpy since we don´t need a full body, just enough so that it will create the impression of a body when the fish is displayed in the monter.

In the second picture, the body is baked and ready (actually a bit over-baked by the look of it but who cares?) and it is seen from the approximate display angle. The rear end of the body will be covered with seaweed or other vegetation so that you can´t see how it ends. Sim sala bim! 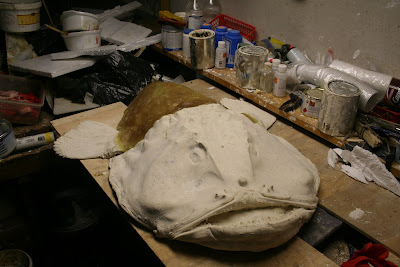 Hereafter will follow sanding, lots of fiberglass putty, and more sanding and sanding to make the body as well as the head and fin junctions look right. After that, fine detailing of the mouth/eye area and also teeth, fringe flaps (look at a diving picture of a live monkfish and you´ll understand what I mean), eyes and the "fishing rod" that the monkfish uses to catch his prey.

I´ll get back to the Monkfish Baking project from time to time and let you know how it proceeds.